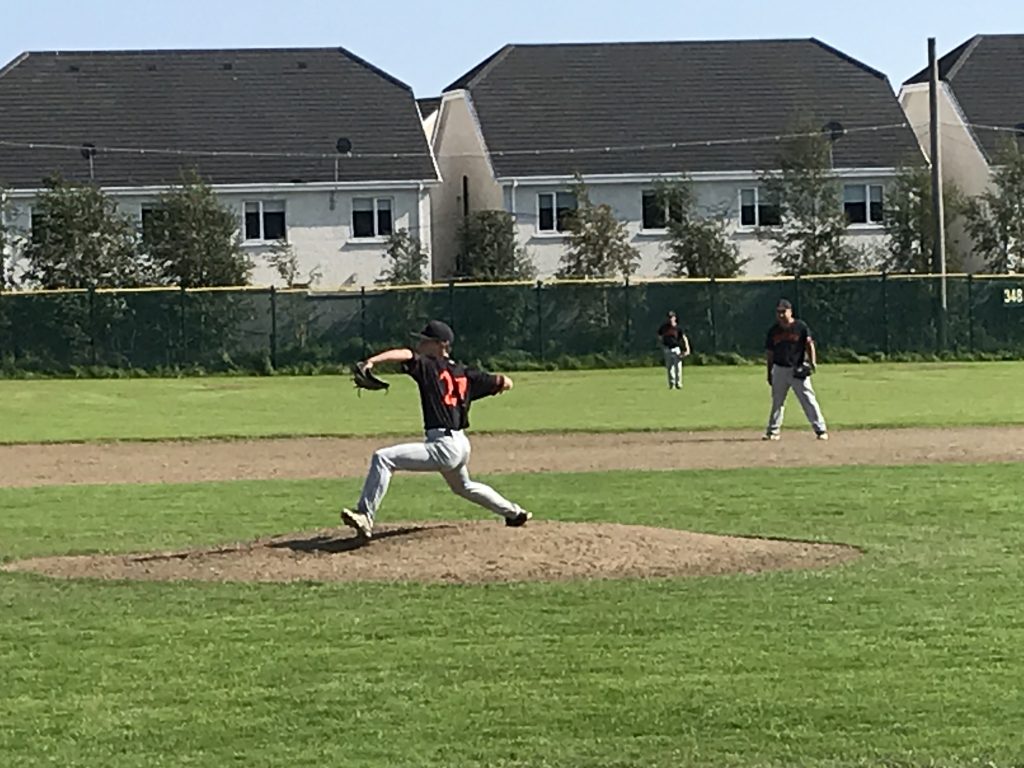 After a scoreless first, the Hurricanes drew first blood. Lithuanian National Team member Marius Dargis drew a well earned walk by making Giants starter Nico Corvalan throw nine pitches to start the inning. After advancing to second on a fielders choice, Dargis comes home on a single by Rav Mphande. After a walk and a single advance Mphande to third to load the bases, Jorge Caliente reaches on an error to score Mphande. The Giants hold the damage to 2 runs as the next batter grounds into a fielder’s choice to third baseman Miguel Moreno.

The Hurricanes make it 3-0 as catcher Roberto Marquez reaches on an error and immediately steals second. After advancing to third base on a wild pitch, Marquez scores on a Dargis sacrifice fly to left field to make it 3-0 Hurricanes.

The Giants close the gap in their half of the third. Centre fielder Ryan Wiebe gets on base with a walk and advances to second on a bunt single by Fionn Gallahar-Hall. Moreno then comes to the plate and hits a screaming ground ball up the third base line to score Wiebe from second. Gallahar-Hall then scores on a Alberto Romano ground ball to short to close the gap to 3-2.

Things remain scoreless until the bottom of the 5th when the Ryan Wiebe hits a lead off triple to right field. Wiebe then scores to tie the game as Gallahar-Hall reaches on an error by the second baseman. The Giants proceed to load the bases when former Irish National Team member Sal Rizo reaches on an error to score Gallahar-Hall. Moreno then scores as Giants newcomer Alexis de la Cruz gets his first hit as a Giant. Feidhlim Deering then comes to the plate with the bases loaded and singles to centre field to score Rizo. 6-3 Giants.

The Giants add to their lead as Giant’s 16 year old wunder kid, rookie David Linn hits a one out double. Linn comes around to score on Devin Carrihall’s single to extend the Giants lead to 7-3.

The Hurricanes start to claw back their way back as relief pitcher Moreno starts to tire. Dargis comes in to score as Joe Zefran singles to right field to tighten the gap to 7-4. Then Garreth Pearce came home as former MVP, Jose Martinez singles to centre making the score 7-5.

After lead off hitter Wiebe gets caught stealing on a rocket by Marquez, Gallahar-Hall draws a walk, steals second and scores as Moreno hits a rocket centre field to make the score 8-5.

With Moreno out of gas, the Giants turn to rookie Linn to see if his magic extends to the mound. Facing the heart of the Hurricanes order, he proceeds to strike out the fiery Kelvin Amonte before getting Marquez and Dargis to fly out. Giants win 8-5.

Moreno was the big gun for the Giants going 4 for 5 with a double and 2 runs batted in. Moreno also threw 5 innings of 2 run ball. Speedsters Gallahar-Hall and Wiebe used their speed to score 3 and 2 runs respectively.