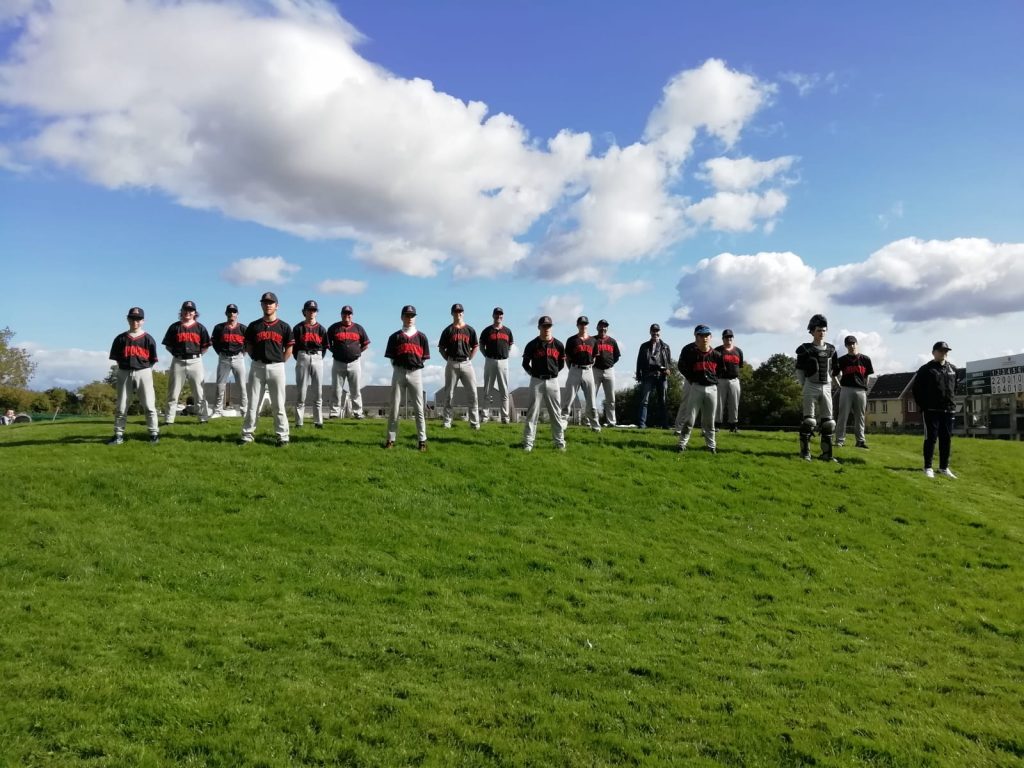 Ashbourne Giants U21 won the club’s second Irish Baseball League Championship by defeating Mariners Baseball 13-5 in a rematch of the last game of the regular season.

The U21’s young guns jumped on Mariners starter Alex Caparu with three consecutive singles. Shortstop David Linn got them going with a single to left field followed by a stolen base. Linn advanced to third on Fionn Gallahar-Hall’s single to left field. Gallahar-Hall stole second to set the table for Giants Centre Field Ryan Wiebe. Wiebe got on base on a bloop single driving in Linn. Gallahar-Hall advanced to third on the play and came home on a sacrifice fly by third baseman Patrick Mitchell. 2-0 Giants.

The Giants added to their lead in the second inning. Caspar Coffie gets on base with a laser single to start it off. Second year player Sean O’toole grounded into a fielders choice to retire Coffie. Right fielder Corbin Cronin-Allen gets on base when pitcher Caparu loses a pitch and hits him. Leadoff hitter, Linn comes in and singles to centre field to load the bases. Fionn Gallahar-Hall and Ryan Wiebe hit back to back singles to drive in O’toole and Cronin-Allen before the inning ends to make the score 4-0.

Things get tense in the third as the Giants show their nerves and the Mariners stage a comeback. Catcher Sam Marcus gets on base when starting pitcher Caspar Coffie hits him. Third baseman Lisa O’Regan capitalises on some sloppy fielding by the Giants to reach first. Center field Matt McCann loads the bases by drawing a walk on normally steady Coffie. Left fielder Paddy Fleming hits a ground ball single to score Marcus and load the bases again. Veteran first baseman Matt Green keeps the pressure on as Coffie is uncharacteristically wild and hits him to drive in O’Regan. Caparu then takes advantage of further Giants fielding miscues to reach base and score McCann. Fleming comes home with the inning’s fourth run as shortstop Matt Dutton hits into a fielder’s choice for the innings first out. The Giants then got thing under control as the next two batters lined out to third baseman Patrick Mitchell. Tie game.

After a scoreless 4th, Giant’s captain Ryan Wiebe becomes a one man scoring machine. Wiebe singles to right field, proceeds to steal second and third allowing veteran first baseman Sean Mitchell to cash him in with a sacrifice fly to right. The Mariners respond in their half of the fifth as Fleming singles to start the inning, steals second, advances to third on Mat Green’s single and scores on Alex Caparu’s sacrifice fly to tie the score.

Things were quiet in the 6th before the Giants jumped on Mariners starter Caparu. Caparu starts to tire and loads the bases on a single, a walk and a hit by pitch. His control doesn’t return as he walks the next two batters and hits a third to score three with the bases still loaded. The Giants score a 4th run on a sacrifice fly and the 5th on a wild pitch to take a 10-5 lead.

After a scoreless 8th, the Giants add three insurance runs in the 9th to win the championship 13-5.

Caspar Coffie went the distance for the Giants, giving up 3 earned runs on 4 hits and 2 walks.

Paddy Fleming and Matt Green led the Mariners with 2 hits. Fleming also scored two runs and had a stolen base.